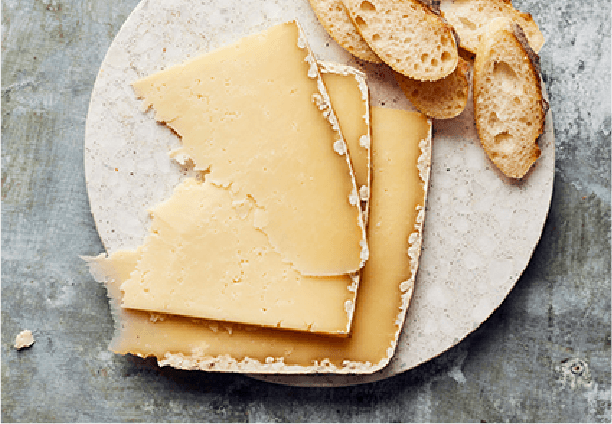 This large, dry-rind cheese is exclusively made with whole cow’s milk. The cheese is uncooked and has the specificity of being pressed twice. The curds are crushed between the two pressings and salted in the mass, giving this cheese a grainy, crumbly texture.

The maturation of Cantal requires at least thirty days for a ‘Cantal jeune’ and can be continued for over eight months for a ‘Cantal vieux’. For intermediary maturation periods, the Cantal is referred to as ‘entre-deux’ (with a minimum of ninety day’s maturation).

The firm texture of this cheese reveals an ivory colour when it is turned out of the mould, and gradually becomes dark yellow. Initially soft, the texture can become slightly crumbly for the more mature cheeses. As the rind develops, it gradually becomes thicker, going from greyish-white to gold and then brown. It can be dotted with ochre to brown spots.

Tangy with a distinctive fresh butter taste in the beginning of its maturity, the taste intensifies with time to become fruity and persistent.