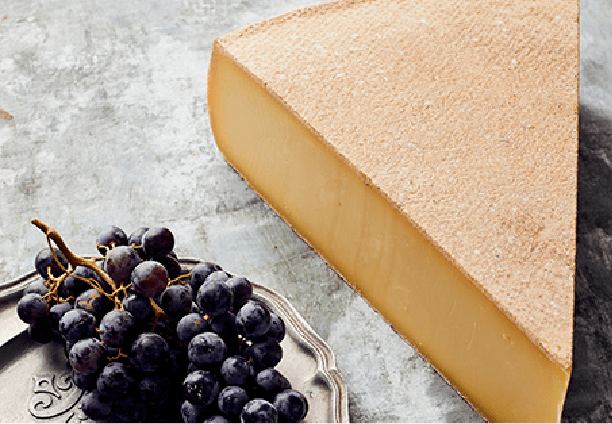 This cooked pressed cheese is made from raw cow’s milk. The Montbéliarde and Simmental breeds used for this cheese are exclusively fed with hay from a specifically designated zone.

The cheese is produced in the Jura Mountains, near French and Swiss border. Since the 11th century, farmers in this region have been joining forces to gather raw milk produced each day by the various herds to produce wheels of Comté ‘à la fruitière’, a traditional cooperative system.

One wheel of this cheese is a concentrate of 132 gallons of milk. The maturation of Comté lasts at least four months, but can be extended to more than twenty-four months.

Comté has a thin, dry, smooth, brown rind. The colour varies from creamy yellow in the winter to a deeper yellow during the grazing period; its appearance is smooth and dense and reveals few or no holes.

Its flavour is mild and balanced; its texture is firm and soft; and its aromas are variable and delightful, including fruity, buttery and woody notes, among others. These aromas become more complex and persistent with maturity.

Ham in a toastie! Preserved walnuts or whole roasted garlic